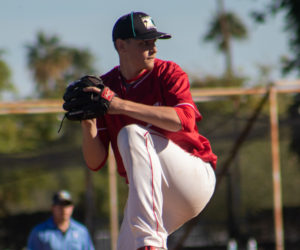 Luis Almonte pitched six plus innings for the Palm Springs Power and kept the British Columbia Bombers offense in check in 9-4 victory Friday morning at Palm Springs Stadium.  The victory improved the Power to 4-3 and dropped the Bombers to 5-2 on the season.  The Power took an early 3-0 lead in the second inning and the Bombers answered with two runs in the bottom half.  The Power added another run in the third to go up 4-2 and blew it open in the fourth with four runs, extending their lead to 8-2.

The Canada A’s used three pitchers for a combined 2-0 shutout victory over the Palm Springs Chill Friday afternoon at Palm Springs Stadium.  It was the first shutout by any team in the 2020 California Winter League season.  With one out in the bottom of the first, John Toppa drew a walk and stole second.  Colton Trager doubled him home.  Kyler Ruedessili then singled home Trager.  It was all the scoring that the A’s needed.  Blake Marks tossed four shutout innings in his start for the A’s and struck out four.  Nolan Knox then came in and pitched a shutout fifth and Kyle Taylor entered in the sixth to complete a six out save.

Blue Sox Homer their way to Second Win Over the Northstars

Friday’s morning game on the auxiliary field featured the Washington Blue Sox vs. Manitoba Northstars.  By the second inning the Blue Sox took the lead with a solo homerun off the bat of Eric Elkus.  Moving into the fifth inning Justin Lott hit a three-run home run into deep centerfield.  Rounding out the game the final score came to 9-4.  Lefty Nicholas Wasilowski picked up the W. 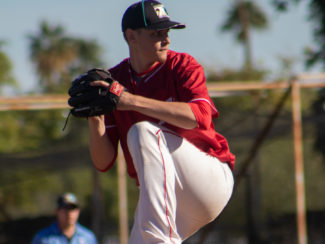