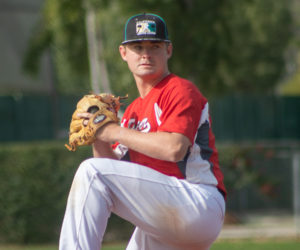 Monday morning’s Auxiliary Field game pitted the British Columbia Bombers against the Palm Springs Power. The Bombers took an early 2-1 lead after the first inning. The Bombers would only get one more after that. The Power scored four in the fourth and one in the fifth in their 6-3 win. Stephen Chamblee struck out 11 and earned the win in a dominate complete game performance.

Yudai Nakamura’s two-run single in the top of the seventh inning of game one at Palm Springs Stadium lifted the Manitoba Northstars to a 7-5 victory over the Alberta Grizzly. The Northstars scored four in the top of the third, but the Grizzly tied the game after four. Both teams exchanged runs in the sixth before Nakamura came through in the seventh. Navari Julius and Nakamura both had 2 RBI’s in the win. Champ Davison had two hits, including a two-run double in the loss.

The Washington Blue Sox sent 12 to the plate in the second and scored eight times in their 12-9 win over the Oregon Lumberjacks in the afternoon game at Palm Springs Stadium. Oregon answered with five runs in the bottom of the second, but that’s as close as they would get. Washington scored three in the fourth and one in the sixth to put the game away. The Lumberjacks scored two runs in both the fifth and seventh. Romero Harris finished the day 3-for-5 with a solo home run, three RBI’s, and two runs scored. Jordan Gonzalez also homered for the Blue Sox in the win. Tully Allen finished 2-for-4 with a double, two RBI’s, two runs, and a stolen base in the loss. 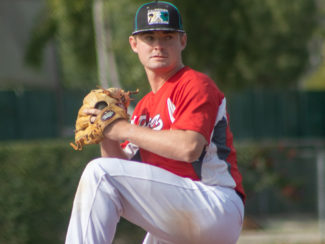