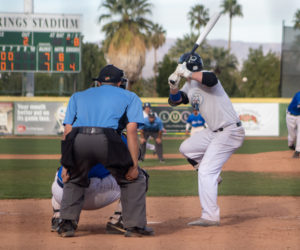 Lingua Wins Game on Mound and at Bat for Power

Daniel Lingua came on to pitch in the bottom of the sixth inning for the Palm Springs Power with the game tied at four against the British Columbia Bombers.  He pitched a shutout inning, then came to bat in the top of the seventh with Manuel Jefferson at second, representing the go ahead run.  Lingua singled Jefferson home giving the Power a 5-4 lead.  He then returned to the mound in the seventh to close out the game and give himself the win.  The victory gave the Power five wins in a row and improved them to 7-3 on the season.

The Palm Springs Chill held off a furious rally by the Washington Blue Sox in an 8-7 extra inning victory Wednesday afternoon at Palm Springs Stadium.  Trailing 7-1 in the bottom of the fourth, the Blue Sox scored five to cut the lead to 7-6.  Starting in the fifth, both bullpens entered the game and were lights out, with Lachlan Fontaine striking out six for the Chill through the sixth and Austin Shea striking out nine for the Blue Sox through the eighth.  Keaton Sullivan came on for the Chill in the seventh and gave up a lead off double to Eric Elkus and then an RBI single by Justin Lott to tie the game at seven.  With two outs and Sam Neufeld on second where he began the inning due to international tiebreaking rules, Cory Wills doubled him home to put the Chill back on top 8-7.  Sullivan came back on in the bottom half and pitched a shutout inning, earning the victory.

Wednesday’s morning game faced the Manitoba North Stars against the Canada A’s.  The only run scored in the game came in the first by way of an RBI double off the bat Riley Mihalik scoring John Toppa.  Both starting pitchers went at least five innings with Neil Lang of the North Stars going the full seven.  Tyler Tomaka and Austin Rubick would come out of the bullpen for perfect innings allowing for the A’s to complete the game for 1-0 victory.  Blake Marks earns the win as Austin Rubick would get the save. 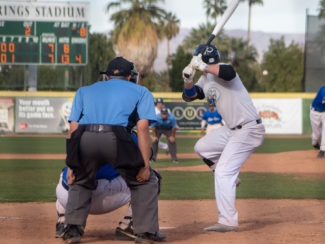