The Friday morning game captured a close one between the Oregon Lumberjacks and the Washington Blue Sox. In the first inning, the visiting Lumberjacks put up two runs while the Blue Sox retaliated with five runs. As the game went into the second inning, the Lumberjacks would score another two runs, while the Blue Sox come back with one of their own. The game stayed tight right until the end, each team putting runs on the board during offensive frames. However, the Blue Sox came out victorious, making the final score  8-5. The winning pitcher was Nicholas Wasilowski. There were three homeruns hit in this game, a three run shot by Romero Harris, and solo shots by Bryan Benz and Jonah Dean-Hargroves.

After a scoreless first inning for both sides, the Alberta Grizzly scored three in the bottom of the second to jump out to a 3-0 lead. The British Columbia Bombers countered with one in the top of the third to cut the deficit to 3-1. The Grizzly added two more runs in the bottom of the 3rd to push the lead to   5-1 Grizzly. The Grizzly bullpen held the Bombers off the board until the top of the seventh when the Bomber got one to cut the deficit to 5-2 but that is how the game would end. Malcolm Grady picked up the win going 4.1 in his start allowing just one run and three hit while striking out seven.

The Palm Springs Power jumped out to an early 2-0 lead with two runs in the bottom of the opening inning. The NorthStars countered with one in the top of the 2nd after Yudai Nakamura singled and stole 2nd and 3rd before coming into score on a wild pitch. In the bottom of the second the NorthStars were treated to a spectacular line drive leaping grab by Nakamura at 3rd to prevent extra bases. The 2-1 Power lead carried into through the 4th until the NorthStars broke through with two runs in the 5th to take a 3-2 lead. The NorthStars broke the game open with four runs in the top of the 6th to extend the lead to 7-2. The NorthStars were treated to a masterful performance by Kyle Grant who went 4.0 inning in his start, allowing just two runs, two hits, while striking out six. Anthony Garcia slammed the door shut picking up the three inning save only allowing one hit while striking out seven. 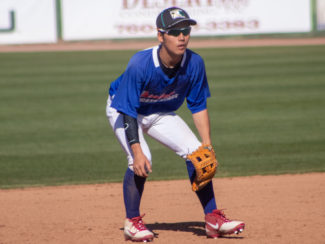