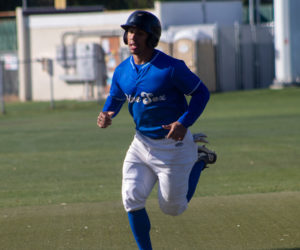 The first six Palms Springs Chill hitters reached base safely in the bottom of the first inning, leading to four runs beings scored on their way to a 6-5 victory over the Alberta Grizzly Saturday morning at Palm Springs Stadium.  The victory was the fourth in a row for the Chill, improving them to 8-4 on the season.  Lachlan Fontaine was solid on the mound, striking out three in three innings of work for the Chill and gave up only one run.  The Chill led 6-2 when closer Keaton Sullivan entered the game in the top of the sixth.  The Grizzly added a run that inning to inch closer.  At the start of the seventh, the Grizzly loaded the bases with nobody out against him.  The momentum shifted when Sam Troyer hit into a double play in which one run scored and another runner advanced to third.  Cal Fazzio then singled home a run to cut it to 6-5 before Hirofumi Ohtsuka popped out to Sullivan to end the game.

Russomano Out Duels Chamblee in Win

Jonathan Russomano for the Canada A’s and Stephen Chamblee for the Palm Springs Power each went six innings on the mound and struck out five Saturday afternoon at Palm Springs Stadium.  Russomano did not allow any runs and Chamblee allowed one run in a 1-0 victory for the A’s, handing the Power their second straight loss.  Kyle Ruedisili led off the bottom of the second with a triple for the A’s.  He then came in to score on a sacrifice fly by John Toppa for the game’s lone run.  Austin Rubick came on to pitch the seventh for the A’s to record his second save of the season.

The Washington Blue Sox hit three home runs en route to their 12-4 win over the Alberta Grizzly on the Auxiliary Field. In the first, Romero Harris and Kameron Sorenson exchanged two shots. Eric Elkus hit a three-run home run for the Sox in the third, and Harris added a three run blast in the Blue Sox four run fourth to blow the game open. Riley Hickerson also homered for the Grizzly in the loss. Harris finished the day 3-for-5 with two home runs and five RBI’s. 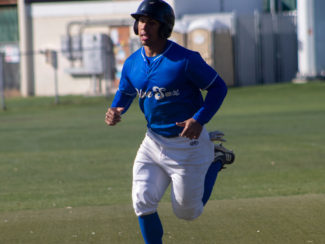