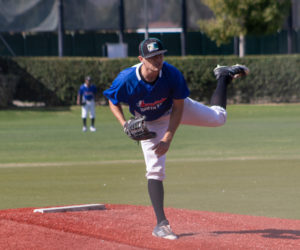 Sunday’s Auxiliary Field game resulted in a 3-2 win for the Palm Springs Power over the Manitoba North Stars in eight innings. Both Daniel Lingua and Neil Lang went seven innings and allowed just one run. Derek Bangert’s RBI-double gave the Power a 2-1 lead in the eighth. Bangert would score the winning run on Myles Wilson’s double. Roberto Berdecia’s RBI single in the bottom of the eighth rounded out the scoring. Daniel Lingua earned the win for the Power, while C.J. Broussard picked up the save.

The British Columbia Bombers defeated the Washington Blue Sox 9-3 in game one at Palm Springs Stadium. The Blue Sox got off to a hot start, scoring three in the top of the first before the Bombers scored 9 unanswered. Juan Simmons-Ganzaroli finished the day 3-for-3 with two RBI’s, two runs, and a walk for the Bombers. Shao-Pin Ho and Austin Pollack both had two-run singles in the win. On the mound, Kyle Lugar allowed three runs to the first seven batters, then retired the final eight he faced. Joseph Rivera earned the win in relief, he struck out eight in four scoreless innings.

The Canada A’s took down the first place Palm Springs Chill 9-7 in the afternoon game at the stadium. Jake Luce hit a pair of solo home runs as the Chill built a 6-1 lead after four innings. A two-run single from John Toppa in the fifth and a two-run single from Riley Mihalik in the sixth cut the A’s deficit to one. Jordan Williams came into score the tying run on a wild pitch. Peyton Isaacson struck out the first two A’s in the seventh, before Nicholas Rose reached on an error in center. After a walk, Colton Trager hit a game winning three-run home run to right field to put the A’s up for good. Matthew Lillard’s RBI-single in the seventh rounded out the scoring. Luce finished the day 3-for-4 with a pair of solo home runs, while Lillard finished with three RBI’s in the loss.

Riles Hits for Cycle as Northstars, Lumberjacks, and A’s Win on Day 19 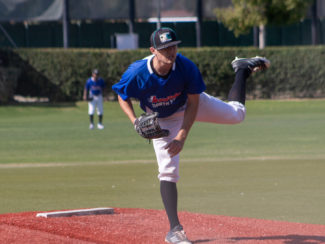