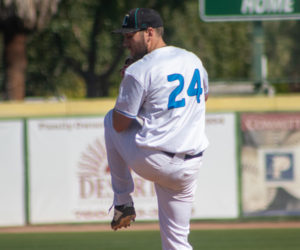 The Palm Springs Chill took down the Washington Blue Sox 8-6 in the first game of the day at to advance to the American Division Semifinals. Tristan Graham drove in the first run with a single in the first, in front of Payton Isaacson, who hit a three run home run to extend the Chill lead to 4-0. RBI singles from Kokoro Aomatsu and Isaacson helped extend the lead to 7-0 after four. The Blue Sox trailed 7-4 in the sixth and had the tying run at first for Bryan Benz, who struck out swinging to end the inning. In the seventh, Bobby Johnson came up as the tying run, but struck out to end the game. Isaacson finished the day with four RBI’s in the win.

The Canada A’s defeated the Manitoba North Stars 7-6 to advance to the Canadian Division Semifinals. The game was tied at two after two innings, until sacrifice flies from Riley Mihalik and Eric Ramirez in the third and fourth gave the A’s a 4-2 lead. Hunter Hisky’s RBI infield single in the sixth cut the North Stars deficit to one, but the A’s countered with two in the bottom half. In the top of the seventh, Manitoba scored three times to extend the game. RBI singles from Greg Vaughn Jr and Hisky cut the deficit to one, and Navari Julius’s RBI infield single tied the game. In the bottom of the seventh, Jordan Williams singled with one out, stole second, and scored the winning run on Mihalik’s walk-off single.