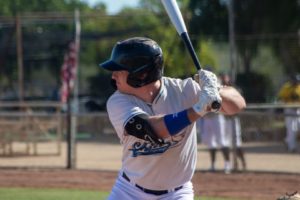 Palm Springs, Calif. – It’s been one long road for Jake Lucé . The 30 year old, outfielder from McKinney, Texas would be the first one to tell you that baseball has been one long road full of trials and triumphs. But all of those years of pushing, fighting for his dream of playing professional baseball continued when he was offered a professional contract to play for the Southern Maryland Blue Crabs of the Atlantic League of Professional Baseball during this 2020 California Winter League Season.

Jake Lucé is a familiar face California Winter League fans have seen for quite some time, as Lucé was a participant of the California Winter League dating back to the winter of 2016.  When asked why he kept coming back to Palm Springs, he simply states, “I believed in myself and there is no better investment to make than the one in yourself. All you have to do is get one person’s attention. It’s my life and I live this everyday.”

This contract with the Blue Crabs isn’t the first professional one that has slid across Lucé ’s eyes. He actually has had several stints in professional baseball prior to this season in the American Association, United League, Frontier League, and the Atlantic League and even in affiliated baseball with the Baltimore Orioles organization.

His first professional stint came with the American Association in 2012, as he was fresh out of college from Elon University, a Division I program in North Carolina; Lucé graduated with a degree in broadcast journalism. In 2012, at the age of 21, Jake found himself back in the state of Texas, joining the Amarillo Sox of the American Association.  He found himself playing in 27 games during his rookie campaign. Lucé chuckles and reminisces about his memories just starting in professional baseball as he says, “ I was not ready for that league.”

For the 2013 season, Lucé found a home with the Rockford Aviators of the Frontier League. His father had just been diagnosed with a life-threatening brain tumor and needed emergency surgery. “There was a lot going on during that time,” Luce said. I simply couldn’t be at the field while this was going on.” Fortunately, Joe Luce’s surgery and recovery were a success.

During the 2014 campaign, Jake played for the Brownsville Charros of the United League, playing for manager Ozzie Conseco. The United League operated in Texas and merged with the Golden Baseball League and the North American League in 2012. It eventually dismantled in January of 2015. Later in that same season, Jake was traded to the Wichita Wingnuts of the American Association. During his time with the Wingnuts, Lucé won a championship title and was Player of the Game on the final day of the series.

At the turn of the new year, that is when things started changing and the Baltimore Orioles came calling. Lucé went through minor league camp with the Orioles in 2015 and had an impressive showing. He hit over .500 during his time in camp. Unfortunately, the Orioles decided to not retain Jake’s contract and he was released.

Ryan Powell, former Baltimore Orioles head of independent scouting that is credited to signing Lucé in 2015, commented on Jake’s performance at this season’s California Winter League and his new adventure with the Southern Maryland Blue Crabs,  “Jake has stayed persistent in his mission statement of continuing his professional career. He’s worked very hard on and off the field and is embracing his game.  He tied on the cleats, put the helmet back on, went to war at the plate and resulted in earning an opportunity in the Atlantic League.  I’ve seen Jake grow over the years and I’m happy for this opportunity for him,” Powell was a manager in the California Winter League this season representing the Lake Erie Crushers where he was just announced as the hitting coach for the 2020 season.

Following his stint with Baltimore, Jake found himself with four different teams, across three different leagues. He finished the 2015 season with the Lancaster Barnstormers of the Atlantic League, playing for former California Winter League Manager, Dennis Pelfrey. Pelfrey is now with the San Jose Giants, serving as the Manager for the San Francisco Giants’ single A franchise team. Following his stint with the Freedom, Jake was promoted to play for the Bridgeport Bluefish in the Atlantic League,  was then traded to the Lancaster Barnstormers, and eventually found his way back to the American Association after being traded to the Sioux Falls Canaries. Shortly after joining the Canaries, Luce was hit in the head with a 95 mph fastball during a game against the Amarillo Sox. He was carted off the field and hospitalized – his 2015 season was over.

If one looks at his baseball reference, a fan would see Lucé has not played competitive baseball since his time with the Texas Air Hogs of the American Association during the 2017 season. From the final out of last year’s Winter League to the start of the 2020 season, Jake had not seen live pitching. He kept active in the gym, getting himself mentally and physically where he needed to be with the help and guidance of his strength trainer, Jeff Anuwe and his speed trainer, John Kasa.

What would surprise people would be the name he has made for himself outside of the field. Jake founded Lucé Prospect Group in 2014, focusing on the development of high school athletes and getting them to the next level of play.

As he focuses on his journey with Southern Maryland, he reflects on the mission statement of LPG and the impact he has made on players and families – it has come full circle for him as he lives by the motto, “ The greatest failure, is success without fulfillment, It’s because of these kids and their families that I am fulfilled.”

Lucé reports to Spring Training for Blue Crabs Manager, Stan Cliburn in April. Jake played for Stan all winter during his time on the Palm Springs Chill at the California Winter League. Cliburn had the chance to watch Lucé front and center as he had the best winter of his career statistically. Cliburn signed Jake about halfway through camp. Prior to playoffs, Lucé was .429 at the plate, hitting two doubles, one triple, and two homeruns. He had 13 RBI. During his last regular season game, Lucé went 3 – 4 with 2 homeruns.

Stan Cliburn, Manager of the Blue Crabs said, “Jake will bring leadership and experience to the ball club, which is what every team needs to have for success”

“To have the opportunity to play for someone who has the experience that he has (Cliburn), I cannot wait. I cannot wait to be there, learn, and help the team win. That is my focus. I cannot wait to get there and see how the story unfolds,” said Lucé. He adds, “ I’m most looking forward to playing baseball with some of the best players in the world – it’s exciting. “ 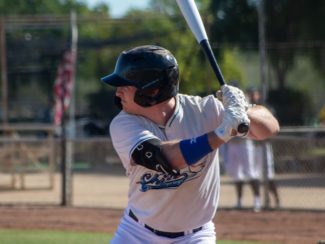