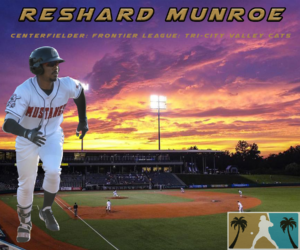 Outfielder Reshard Munroe has been signed by the Tri-City ValleyCats of the Frontier League out of the California Winter League. Shard was singed out of the Bahamas by the Cincinnati Reds and began his professional career as a 19 year old in 2015 and played for five seasons in the Reds’ minor league system. Still just 24 years old, Munroe will look to solidify a spot in the ValleyCats’ all new lineup in 2021. The ValleyCats are joining the Frontier League from the New York-Penn league, so opportunities will be plentiful for incoming players. At the California Winter League. Munroe consistently exhibited one of the top exit velocities, including one ball clocked at 108 MPH. His quick bat and natural power should play well in the Frontier League.