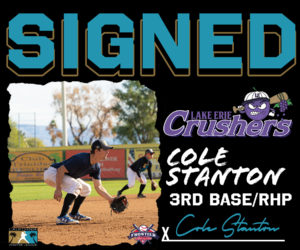 The Lake Erie Crushers have signed 3B/RHP Cole Stanton as a two-way player out of the 2021 California Winter League. Crushers’ Hitting Coach Ryan Powell manager Stanton during the 2021 CWL season and liked what he saw from a skill and work ethic standpoint. This will be Stanton’s professional debut, who attended Saddleback College where he started as a Freshman. Stanton’s strong arm was on display all month long at the CWL, primarily at 3B but also on the mound where the right hander routinely touched 90-91 MPH while mixing in a slider. With roster spots in the Frontier League being particularly tight this season, a solid two-way player may prove to be more valuable than ever. The Crushers’ season kicks off on Thursday, May 27th, at home.