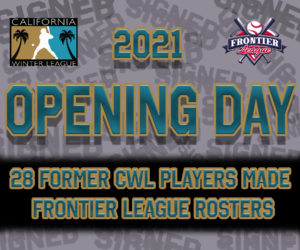 Palm Springs, CALIF – Twenty-Eight former California Winter League players have made Opening Day rosters in the Frontier League. Thirteen of the fourteen 2021 Frontier League teams will begin the season with CWL players on their rosters. The full list includes mostly players from the 2020 and 2021 CWL seasons along with many from 2019 and a few from years’ prior who have been in professional baseball previously. The Frontier League begins its 2021 season today with live game action available on Vimeo all season long. Visit FrontierLeague.com for details.