2022 Season Kicks off With Full Day of Games 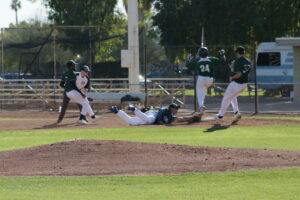 No matter what level you play, opening day is always a wonderful event. The California Winter League began its 2022 season with a tripleheader of baseball, featuring some exciting prospects and high-scoring affairs. The opening game was no exception, as the Oregon Lumberjacks took down the Alberta Grizzly by a score of 11-6.

Behind three innings of no-hit ball from starter Roberto Baldonebro (1-0, five strikeouts), and a four-run third inning, the Jacks jumped out to a five-run lead. But the Grizzly stormed back in the fifth. The first five baserunners got on base and some of the pinch hitters came up clutch, including a scorching RBI double from Travis Tanaka and a bases-clearing single from Delmus Russ. But the comeback fell one run short.

The Lumberjacks got some insurance in what would turn out to be their final frame, as they scored four runs in the bottom of the sixth before a scoreless ninth from AJ Shaw sealed the Lumberjacks’ season-opening win at 11-6.

The Chill jumped out to an early lead by scoring two runs in the first inning on an error. This set the tone for the former Stetson University product Corby McCoy, and the Chill pitching staff who struck out eight batters in the game. Gavin Jones provided pop in the middle of the Chill order going 2-4 with two singles, 3 RBI, a run scored, and a walk. A four run third aided by a bases clearing double by Lenny Pietersz swung enough momentum for the Chill to cruise through the game. Walker Paz provided three hits, 3 RBI, and a run scored for the A’s. However, his stellar performance was not enough for the A’s in this Matchup.

The British Columbia Bombers (1-0) shut out the Palm Spring Power (0-1) 4-0 in the final game of the evening. Luke Drummond started for the Bombers and finished his start with five strikeouts, two hits and one walk over three innings of work.

Yu Sato, Kevin Kirley and Yusei Teraoka came in relief for the Bombers and continued to silence the Power bats striking out four and allowing only one hit and two walks over four innings.

The Bombers scored in the 1st on two errant throws and a wild pitch by Power’s starting pitcher Joseph Sgambelluri, which lead to a run scored by Blake Freeman on a pop fly that fell between Power’s centerfielder Junior Coleman and rightfielder Andrew Gaytan.

No runs were scored by either team between the top of the 2nd and top of the 6th inning. Freeman scored once more on an RBI single by Andrew Caufield. Caulfield and Jacob Cruce scored as well in the 6th on a Felix Aberouette sac fly and Keishawn Clark RBI single.

Teroka shut the door for the Bombers in the top of the 7th with a walk and a strikeout. 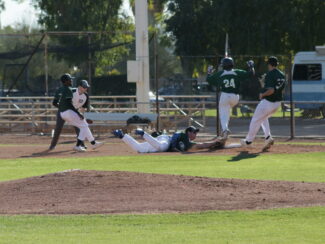