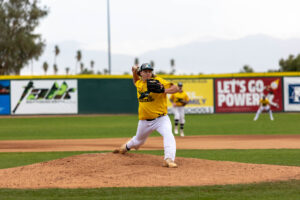 The Bombers improved to 2-0 on the season handing the A’s their second loss of the season moving to 0-2. Griffin Schneider set the tone in the first inning with an RBI single then scored to jump out to a 2-0 lead. Matt Jobes started for the A’s providing six strikeouts through three innings. However, his efforts were not enough to silence the bats of the Bombers. The Bombers continued their barrage of offense in the third inning with a lead-off triple by Griffin Schneider, who scored 3 runs. Followed by a no-doubt two-run blast off the bat of Jacob Cruce. The Bombers never let up as Cruce added another extra base hit in the fifth en route to their second win of the season.

On the heels of an opening day shutout, the Power bounced back with a shutout of their own in a 7-0 victory over the Lumberjacks. Brice Foster set the tone with a dominant start, retiring every batter he faced in his final three frames after loading the bases in the first inning. Foster finished with his first victory of the season and four strikeouts in the final three frames.

An error in the first inning allowed Robert Bruggemeyer to score the first run, and that 1-0 lead lasted until the Power scored three runs in each of the final two frames. RBI doubles from Robbie Carling (2-3, BB, R) and Landen Burns (1-3) extended the Power’s lead in the fifth before they broke the game open in the sixth. Two of their three sixth-inning runs came off the bat of Willie Barcena.

The Power have the day off tomorrow, while the Jacks open up the Sunday slate against the Palm Springs Chill at 10:00 am.

2022 Season Kicks off With Full Day of Games 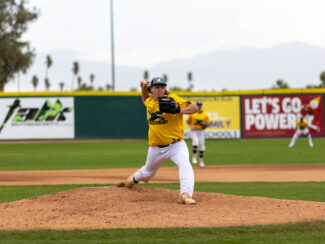