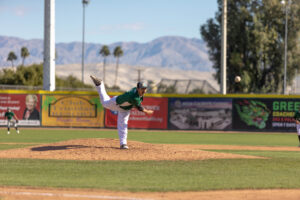 A back and forth contest ended in defeat for the Palm Springs Chill (1-1), as they lost the lead late in a 4-3 defeat. The game was tied at two with the Oregon Lumberjacks (2-1) batting in the top of the fifth when Dontavious Dickey doubled on the first pitch he saw and drove in a run. The Jacks started the offense in the first inning when Drew Thomas singled on a 1-0 count, scoring a run. The Chill tied the game at 2 in the bottom of the fourth off a Blake Porter homer. Christian Kuzemka, who started in the DH spot and came in relief of Kevin Roberts, went three innings, allowing two runs on two hits, striking out eight and walking one batter. AJ Shaw threw one inning in relief in the bullpen and recorded the last three outs to earn the save. Juan Martinez took the loss for the Chill allowing one run on one hit, striking out one and walked none. Jesse Galindo started the game for the Chill allowing two runs on three hits over four innings, striking out 6.  Kevin Roberts started the game for the Jacks and lasted three innings allowing one hit, one walk, no runs and struck out five.

The Alberta Grizzly’s (1-1) earn their first win in the CWL, outscoring the Canada A’s (0-2), 8-2. The Grizzly’s scored three runs in the fifth inning with Brandon, Nieva, Travis Tanaka and Sean Lawlor all knocking in runs in the inning. Mitchell Senger earned the win for the Grizzly’s allowing two hits, five strikeouts and no runs over three innings. Kunimasa Suzuki took the loss for the A’s allowing five hits, four runs, only one earned, two walks and struck out 4. Barrone Porter II went two-for-two for the Grizzly’s with an RBI and a run.

Chill and POWER Both Victorious on Locals’ Day on Day 4 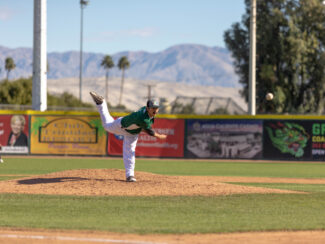