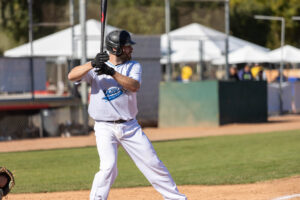 Grizzly take lead in the 5th to defeat Lumberjacks

The Alberta Grizzly (2-2) defeated the Oregon Lumberjacks (2-3) in a 4-3 victory on Wednesday.

The Grizzly got on the board in the second inning with Anthony McDougle drawing a walk leading to a run scored. Nick Kreutzer gave the Grizzly the lead with a 2 RBI double in the fifth inning on a 1-1 count.

Mitch Senger started the game for Alberta allowing only one hit, no runs and struck out one in three innings of work. Takura Fujisawa earned the win for the Grizzly surrendering only two runs, on five hits over two innings. Jackson Dekker and Delmus Russ came in relief. Dekker recorded the last three outs of the game and earned the save for the Grizzly.

The Chill managed to score in every inning except the first. The Chill scored two in the second inning off the bat of Kazuya Ohira. In the third Porter and Ohira contributed largely to the three runs that would score in the third inning. Ohira went 3-for-3 with five RBI.

Jesse Galindo was credited with the victory for the Chill. He allowed only one hit, no runs, over five innings and striking out six batters. Hokuto Kanai threw two innings in relief.

Come on out to Palm Springs Stadium tomorrow, January 27th, for Out of Towners Day! Any fan with an out of state US ID gets in for just $5! And don’t worry Canadians, we didn’t forget about you as every Friday is Canada Day at Palm Springs Stadium featuring $5 admission for our friends to the north!