Bombers and Grizzly Victorious in High Scoring Affairs on Day 7 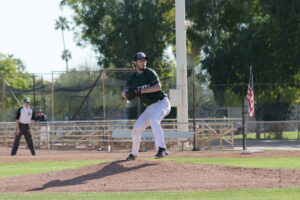 The British Columbia Bombers (3-2) stole the lead late in the game in a 10-9 victory over the Palm Springs Power (3-2) on Thursday. The games as tied at six with the Bombers batting in the bottom of the fifth when Brett Donaty’s sac fly scored one run for the Bombers.

A four-run lead in the fifth inning was just enough for Bombers to hold off the Power for the victory.

The Bombers got things started in the first with a single by Jacob Cruce, scoring one run.

The Power scored three runs in the sixth thanks to the bats of Landen Barns and Junior Coleman.

Luke Drummond started the game for the Bombers and pitched four innings allowing five runs on five hits, striking out eight. Yusei Teraoka earned the win for the Bombers going one and one-third innings, alowing four hits and four runs while striking out two. Kevin Kirley threw one and two-thirds innings in relief out of the bullpen and recorded the last five outs of the game and earned the save.

Bats were blistered on Thursday but the Palm Springs Chill (3-2) couldn’t get the job done against the Alberta Grizzly (3-2) and lost 14-8.

The Chill struggled to contain the high-power offense and gave up 14 runs despite scoring 6 runs early in the first inning. The Chill racked up ten hits and the Grizzly batted 13 hits in the game.

The Grizzly pulled away for good with five runs in the third inning. Sean Lawlor reached on a dropped third strike, Delmus Russ singled and scored one run. Nick Kreutzer doubled and scored 2 runs. Jacob McInnins grounded out, scoring one run.

Arturo Monroy started the game for the Grizzly, allowing four hits and six runs over two and two-thirds innings. Takura Fujisawa was the winning pitcher for the Grizzly and pitched two innings, allowing one run on three hits and striking out one. Jackson Dekker threw two innings in relief.

Corby McCoy started the game for the Chill and took the loss. He went three innings allowing eight runs on six hits and striking out six batters. 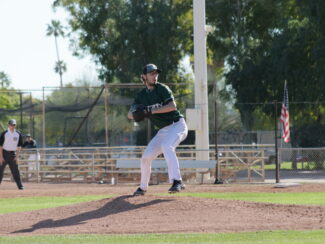