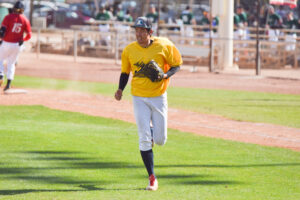 The Canada A’s (2-6) watched the game slip away early and couldn’t recover in a 7-5 loss to the Oregon Lumberjacks (4-4) on Monday. The Jacks took the lead on a single by Omar Ortiz Vazquez in the first inning.

The A’s notched three runs in the seventh inning. The A’s offense in the inning came from a single by Collier Rutledge and a fielder’s choice by Eddie McCabe but fell short from a comeback.

Jack Silva earned the win for the Lumberjacks and pitched five innings, allowing two hits and two runs while striking out four. Adrian Sanchez and AJ Shaw entered the game out of the bullpen and helped to close out the game in relief.

Kunimasa Suzuki took the loss for the A’s after allowing six hits and five runs over three and a third innings, striking out two.

Early Lead for Bombers Seals Fate for the Power

The Palm Springs Power (5-3) fell behind early and couldn’t come back in a 4-1 loss to the British Columbia Bombers (5-3) on Monday.

The Bombers opened up the scoring in the first inning, when Blake Freeman’s sac fly scored one run for the Bombers. Freeman would help out the Bombers and score the last three runs on a three-run home run over the right field wall to put British Columbia ahead 4-0.

The Bombers had every leadoff hitter except one, (Jacob Cruce was hit by a pitch in the sixth) reach on a base hit in each inning and tallied a total of ten hits. Yasuaki Tanaka and Bradley O’Neal were the only players with multiple hits.

Yu Sato was credited with the victory for the Bombers after surrendering one run on four hits over five innings, striking out three batters. Kevin Kirley and Max Peterson entered the game out of the bullpen and helped close out the game in relief. Peterson recorded the last three outs to earn the save for the Bombers.