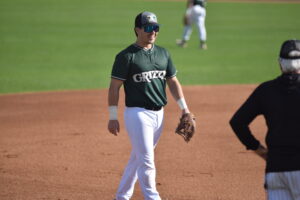 The Chill were leading 3-0 going into the bottom of the seventh. After a lead off inning walk followed by an error, Sean Lawlor hit a single scoring the first run of the game for the Grizzly. Nick Kreutzer would follow with an RBI single, cutting the lead down to just one run. Daisuke Fukuta would hit a sac fly to tie the game at three runs apiece.

Terry Tatum II would get hit by a pitch and Anthony McDougle would strikeout for second out of the inning. The pitcher, Jesse Galindo, worked Travis Tanaka to a 2-2 count before throwing the walk-off wild pitch that would score Kreutzer to complete the walk-off win.

Jesse Galindo had a great start but fell in the seventh inning and took the loss for the Palm Springs Chill. The righty lasted six and two-thirds innings, allowing three hits and four runs while striking out eight and walking one.

This is the fourth walk-off in the last seven days of games played. This is the second walk-off win for the Alberta Grizzly since Jan. 30th against the British Columbia Bombers.

The Canada A’s (2-9) stayed ahead in the game until the end, but the Oregon Lumberjacks (6-5) pulled away late in a 7-2 victory Friday. The Jacks trailed 2-1 in the top of the sixth inning when a fielding error, by center fielder Travious Ford, scored two runs to take a 3-2 lead.

The A’s got on the board in the first inning when Chris O’Neal singled, scoring one run.

The Jacks scored four runs in the seventh inning thanks to the offensive bats of Andres Mendoza, Spencer Keehan, Cain Ruiz, and Jesse Russo, all knocking in runs in the fateful inning.

CWL newcomer, and former MiLB pitcher, Kevin Lenik started the game for the A’s. He went one and one-third innings, allowing no runs and one hit, striking out two. Hakuto Kania took the loss for the A’s after allowing three runs on three hits over four and two-thirds innings, striking out five and walking one.

POWER and Bombers Blast Past Competition on Day 14

Bombers Drop Grizzly and Chill Take Down POWER on Day 16 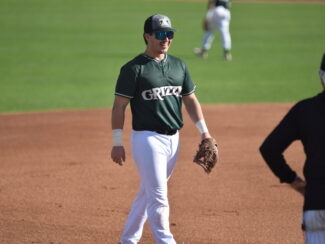