Bombers Drop Grizzly and Chill Take Down POWER on Day 16 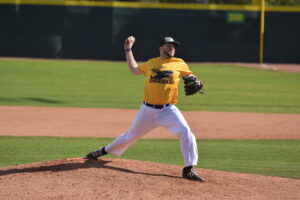 The Chill got things moving in the second inning on a Gavin Jones’ sac fly RBI.

The Power scored three runs in the fifth inning on a home run by Landen Barns.

CJ Broussard started the game for the Power and lasted three innings allowing one hit and one run while striking out two and walking one. Sam Kornstad was the winning pitcher for the Palm Springs Power going four innings and allowing four runs on five hits, striking out six.

Corby McCoy took the loss for the Chill going four and two-thirds innings, allowing six runs on seven hits and striking out six.

Andrew Caulfield led the way for the Bombers offensively tallying three hits on the day, and also scored two runs. Felix Aberouette and Dre Jones each had RBI’s in the sixth inning.

Yu Sato continued his dominance with seven strikeouts, allowing five hits, three runs and four walks in four innings of work and earned the win. Kevin Kirley and Yusaki Tanaka entered the game out of the bullpen and helped close out the game in relief.

The Grizzly battled offensively, but were plagued by pitching mistakes in the fourth and fifth innings.

Arturo Monroy took the loss for the Alberta Grizzly. He went four innings, allowing four runs on three hits and striking out five.

The momentum shifted too late in the game for them to make any sort of comeback effort. The Bombers will look to continue their first place dominance when they take on the Oregon Lumberjacks, Sunday afternoon.

Sundays at Palm Springs Stadium feature $2 Tickets brought to you by Jack in the Box! All tickets are just $2 and include both games.