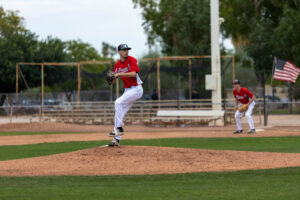 The Power secured the victory thanks to a five run fifth inning. Marques Paige, Casey Combs, and Patrick Metzler all contributed to the inning with RBIs.

The one bright spot for the A’s was a single by Travious Ford in the first inning. The A’s bats would be silent for the game with only four hits coming off their bats.

Joseph Sgambelluri started and earned the win for the Power. He did not surrender a single run on two hits over six innings and striking out 12 batters. Sgambelluri also struck out every starting position player on the A’s. Between the second and fourth inning he would strike out six batters in a row. Sgambelluri would also pitch 17 first pitch strikes to 20 of the batters he faced. The only batted balls into play against Sgambelluri would be two ground balls and two flyouts.

Zach Thompson would come into relief, throwing one inning to record the last three outs of the game.

Ben West started for the A’s and took the loss. He allowed four hits and two runs over four innings and struck out four batters.

The British Columbia Bombers (9-3) seized victory in dramatic walk-off fashion thanks to a walk-off three run home run at the end of the game to defeat the Oregon Lumberjacks (6-6) 13-11 on Sunday.

Despite falling down by five runs in the third inning, the Jacks tried to fight back. The Jacks scored 11 runs before dropping the game in the seventh. Jeremy McKinzie, Christopher Baker, Nicholas Giambalvo, Greg Vaughn Jr. all contributed to the Jacks double-digit scoring affair.

The Bombers scored four runs in the sixth inning thanks to Clifford Prad, Griffin Schneider and Blake Freeman. British Columbia knotted the game up at ten in the bottom of the sixth inning with Felix Aberoutte hitting a sac fly to score the tying run.

Down by one run in the seventh the Bombers managed a single by Yusaki Tanaka, Daisuke Fakuta worked a walk and with one out in the inning Clifford Prad hit a three-run walk-off home run on a 1-2 count to send the Bombers home with a victory.

Max Peterson started the game for the Bombers and allowed five hits and six runs over four innings. Kevin Kirley and Blake Freeman entered the game out of the bullpen and helped to close out the game in relief. Teraoka was the winning pitcher and surrendered one run on two hits over one inning and punched out one batter.

Kevin Roberts started the game for the Lumberjacks and lasted two innings allowing one hit and five runs. AJ Shaw took the loss for the Jacks and went one and one-third innings, allowing seven runs on five hits.