Bombers and Chill Pick up Crucial Wins on Day 19 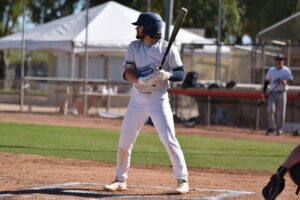 Luke Drummond didn’t allow a single run against the Palm Springs Power (8-4-1) , throwing a complete game shutout and reading the British Columbia Bombers (10-3) to a 6-0 victory on Tuesday.

Brice Foster took the loss for the Power allowing six hits and four runs over five innings, striking out five and walking one. Samuel Kornstad would come out of the bullpen in relief pitching one inning allowing one hit and two runs, striking out two batters.

Drummond was the winning pitcher going seven innings, allowing five hits and striking out ten batters. He is the first to pitch a complete game and pitch seven innings this year at the California Winter League.

The Chill Come Back Late to Secure Victory Over Grizzly

The Grizzly scored three runs to take an early lead thanks to Christian Busby and DC Russ in the second inning. Despite the early lead, the Chill were able to come back down 3-2 on a Gavin Jones two RBI triple off the top of the left field wall to give the Chill the lead.

Tyler Bonsky started the game for the Chill and went three innings, allowing three runs on four hits and striking out six. Hokuto Kanai was the winning pitcher for the Chill. He surrendered zero runs on one hit over four innings, striking out four and walking zero.