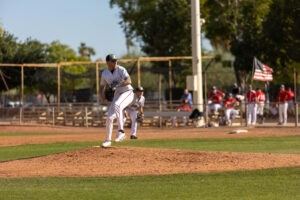 The Alberta Grizzly (5-8-1) fought back after falling down by five runs in the first inning. The comeback fell just short though, in a 13-11 defeat to the Canada A’s (3-12) on Thursday.

Kunimasa Suzuki started the game for the A’s going two and two-thirds innings allowing seven runs on six hits and three strikeouts. Omar Ortiz Vazquez changed uniforms for a day playing and earned a win for the A’s.  He allowed two hits and one run over one inning, striking out one and walking one. Walker Paz, Eddie McCabe, and Kyle Armsworthy all put in work in relief out of the bullpen. McCabe recorded the last three outs to earn the save for the A’s.

The Oregon Lumberjacks (7-8) stayed in the game until the end, but the Palm Springs Chill (7-7) pulled away with a late 5-3 victory.

The game was tied at three with the Chill battling in the top of the sixth when Shao-Pin Ho hit an RBI single.

The Lumberjacks captured the lead in the second inning when Kadrian Russ singled on the first pitch of the at-bat, scoring one run.

In the top of the fifth inning, the Chill tied things up at three runs a piece thanks to Blake Porter’s sac fly RBI.

Jesse Galindo started the game for the Chill allowing three hits and two runs over one inning, striking out two batters. Juan Martinez led the Palm Springs Chill to victory on the mound. The righty went four innings, allowing one run on three hits, striking out five and walking one. Hokuto Kania threw two innings in relief out of the bullpen. Kanai recorded the last six outs to earn the save for the Chill.

Kevin Roberts started the game for the Jacks, surrendering two runs on one hit over one inning, striking out one. Jack Silva took the loss for Oregon lasting two innings, allowing three hits and one run.

The Jacks lost in their last regular season game.

The Chill take on the Grizzly tomorrow at 10 am and the British Columbia Bombers take on the Palm Springs Power in the final day of CWL baseball. Playoffs begin this Saturday featuring a triple header. First game starts at 9 am with the Commissioner’s Cup followed by playoff games at 11 am and 2 pm.

Grizzly and Bombers Close Out Regular Season With Wins 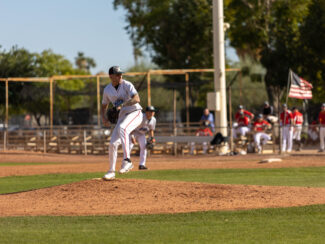