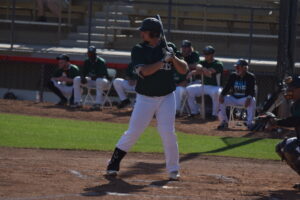 The Oregon Lumberjacks fell behind early and couldn’t come back in a 3-2 loss to the Alberta Grizzly on Saturday.

The pitching was strong on both sides. Alberta Grizzly pitchers struck out five, while Oregon Lumberjacks sat down seven.

The Grizzly opened up scoring in the first inning, when Sean Lawlor hit an RBI double.

Jackson Dekker led the Alberta Grizzly to victory on the hill. The pitcher allowed five hits and two runs and struck out five in his complete game.

Roberto Baldenebro took the loss for the Jacks. The pitcher went four innings, allowing one run on two hits and striking out six.

The pitching was strong on both sides. The Chill pitchers struck out one, while the A’s sat down four.

Jesse Galindo was the winning pitcher for the Chill, lasting five innings, allowing two hits and one strike out. Hokuto Kanai recorded the last six outs to earn the save for the Chill.

Ben West took the loss for the A’s. The righty lasted five innings, allowing two hits and one run while striking out three.

The British Columbia Bombers defeated the Power 8-5 on Saturday.

The Bombers got on the board in the first inning when Felix Aberouette hit a sac fly RBI.

The Bombers scored four runs in the third inning thanks to walks by Bradyley O’Neal and Brett Donaty, a sac fly by Jacob Cruve and a double by Keishaun Clark.

Kyle Johnson started the game for the Bombers and allowed zero runs and zero hits over one inning, striking out two.

Clark made his pitching debut and earned the win pitching two innings allowing one hit. A number of pitchers entered the game in relief. Kevin Kirley, Donaty, Cruce and Malcolm Smith all secured outs and ultimately the victory. Kirley recorded the last three outs to earn the save for the Bombers.

Zach Thompson took the loss for the Power. He lasted two and a third innings, allowing six hits and seven runs while striking out one.

Monday’s contests will feature the Alberty Grizzly at the Oregon Lumberjacks at 10:00am and the Palm Springs Chill taking on the Palm Springs Power at 12:30pm. Monday is Locals’ Day at Palm Springs and all Coachella Valley residents get in for just $5 with proof of residency.