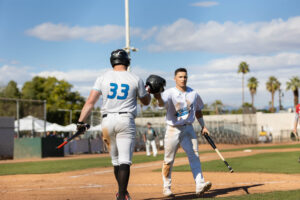 Fresh off a Commissioner’s Cup victory, the Bombers look to send the Grizzly into hibernation after their 3-2 win over the Jacks in the first round of the CWL playoffs. The Grizzly rode a complete game by Jackson Dekker and some timely hitting to a first-round upset of the Jacks. Including the Commissioner’s Cup, the Bombers have won nine straight and are looking to stay hot in their first elimination game of the playoffs.

Game two of the Semi-Finals will feature two of the most well-rounded teams in the California Winter League. The Power are coming off of a loss against the British Columbia Bombers in the Commissioner’s Cup but look to rebound with a strong showing on Monday, as they try to advance to the Championship game. The Chill will look to continue their playoff run after a 1-0 victory over the Canada A’s on Saturday. Both teams will battle it out for a shot at the Championship game on Monday at 12:30 pm.