The British Columbia Bombers Are Your 2022 CWL Champions! 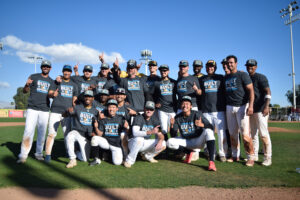 The British Columbia Bombers defeated the Palm Springs Power 12-9 in Tuesday’s Championship game after taking a late lead in the game down 8-4.

The Bombers can thank their 2022 CWL Championship MVP, Felix Aberouette, who went 4-4 with 5 RBIs. He hit singles in the third, fourth, sixth and seventh innings.

The Power got things moving in the first inning. The Power scored one run on a double by Landen Barns.

In the second inning the Power scored three runs thanks to the bats of Gavin Johns, Jake Luce, and Barns.

The Bombers pulled away for good with six runs in the sixth inning. Aberouette hit an RBI single followed by Travis Tanaka with a two RBI double.

Brice Foster started the game for the Power and went three and two-thirds innings, allowing four runs on six hits and striking out five. Samuel Kornstad, Jacob Espitia, Eric Telarroja, and Mitchell Senger each contributed in relief for the Power.

Kornstad took the loss for the Power after going two innings allowing four hits, six runs and struck out one batter.

Kevin Lenik started the game for the Bombers allowing three hits and two runs over one inning, striking out one batter. Yu Sato, Hakuto Kanai, Max Peterson, Jack Silva and Jesse Galindo all came in relief for the Bombers.

And a big THANK YOU to you, the fans, who have supported our players, coaches, staff and interns during the entirety of the 2022 California Winter League. We’ll be back next winter for more CWL baseball!