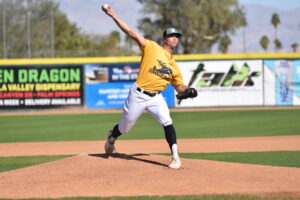 PALM SPRINGS, Calif – 2022 California Winter League alum Right-Handed Pitcher Kyle Johnson made his debut Tuesday, March 29th, in a Major League Spring Training game for the Chicago Cubs. While the outing was brief, with Johnson recording just one ground out to get the Cubs out of the second inning against the Diamondbacks, Johnson’s journey to his big league camp debut has certainly been anything but brief.

Originally an outfielder at Purdue, Johnson always featured a plus arm from the outfield. At 6’4″, 220 pounds he looked the part of an athletic, middle of the lineup power hitter. Following college, Johnson made the move to the mound where he featured a very raw low to mid 90s fastball. Johnson made his professional debut in 2016 in the Yankees’ system, pitching 15 innings in the Gulf Coast Rookie League. Despite walking 11 hitters in the span, Johnson struck out 13 and showed flashes of major potential as a pitcher. After missing 2017 due to injury, Johnson pitched 22 and 1/3 innings in 2018 and was released despite a 2.42 ERA. In 2020 and 2021, Johnson would make a return to the diamond pitching in independent baseball including stints in 2021 for the Windy City Thunderbolts of the Frontier League and the Lancaster Barnstormers in the Atlantic League. However after the time off following his time with the Yankees, Johnson struggled, posting ERAs north of 5.50 for both organizations.

Late in 2021, Cubs scout Kyle Phillips saw Johnson throwing at an indoor facility in San Diego. Phillips noted how big and physical Johnson was and was convinced that there was more than the 92-93 MPH that he had previously shown that was waiting to be tapped into. After following up and working with Johnson, Phillips was proven right when the radar gun regularly began to read 95-96 during bullpen sessions.

In February of 2022, Phillips made his way to the California Winter League, as he does most every year, to see the 150-200 players that the CWL features. During that visit, he made mention of Kyle Johnson and how the league would be perfect for the pitcher who needed to face live hitting. The Cubs were already interested in potentially signing Johnson, but they needed to see him face live hitters. Within a matter of days, Johnson was on a CWL mound in Palm Springs competing, and doing it well. Now 28 years old, Johnson needed to show something quickly in order for the Cubs and Phillips to take a chance on an older prospect. After a few pitches, it was clear that that chance was worth taking. Johnson was regularly throwing strikes at 96-97, touching 98, while mixing in a curveball and fading change-up. After his first appearance, Johnson pitched in the CWL for the remainder of the regular season and playoffs and consistently showed a 97+ MPH fastball. Within a week of the California Winter League season ending, Johnson had a contract from the Chicago Cubs. Originally slated for minor league work in camp, Johnson found himself in the bullpen on the Major League side for Tuesday’s match-up with the Diamondbacks. When Cubs starter Justin Steele hit his pitch count, Johnson was called upon to get the final out of the second inning. Throwing five pitches, Johnson induced a ground out with a runner on third base to retire the side. Steele would head back out to the mound for the third inning.

For someone like Kyle Johnson to even be sitting in the bullpen for a Major League Spring Training game after so little action in the affiliated minor leagues over the last few seasons is incredible. Six weeks prior, Johnson was pitching in the CWL playoffs. If the talent is there, however, things can happen very quickly in baseball and it’s clear that the Cubs see what Kyle Phillips saw in Palm Springs in Johnson. The future looks bright for the 6’4 righty with the 98 MPH fastball out of Purdue, and hopefully Johnson can move quickly through the Cubs’ system this year and potentially reach the Major Leagues.