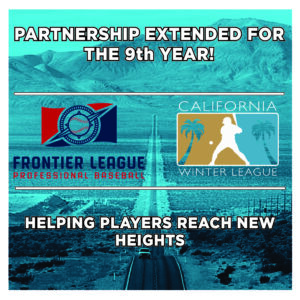 “We are excited to extend our relationship with the California Winter League into a ninth season.  The CWL has proven to be a valuable part of our scouting and player recruitment operations, as evidenced by the four CWL alumni who were Frontier League All-Stars this season.  The opportunity for a player to be evaluated in game action for four weeks makes the California Winter League the top development organization for players looking to begin or continue their professional baseball careers,” said Frontier League Deputy Commissioner, Steve Tahsler.

Tom Vaeth, manager of the Washington Wild Things in the Frontier League, has attended the CWL four times as an instructor and manager, signing CWL players each year. Vaeth had this to say about the CWL: “The CWL is unique in that, unlike ordinary tryouts that last only for a few hours, it gives young players a chance to showcase their abilities over the course of a full winter season. As a manager, it is way more beneficial to evaluate players during actual gameplay than just seeing them work out, taking ordinary ground balls and regular BP. I’ve had the opportunity to sign multiple CWL players out of the CWL over the years and give them a chance to start or continue their playing careers.” In 2022, Vaeth signed catcher and utility player Landen Barns out of the CWL. Barns has stuck with the Wild Things all season, and continues to be a contributor for Vaeth and the Wild Things after spending the 2021 season in the United Shores Professional Baseball League, where he signed out of the CWL in 2021.

“The agreement with the Frontier League has created so much opportunity for CWL players over the past 8 years and we are thrilled to continue this relationship. To be the Official Winter League of a top MLB partner league will ensure that CWL players have the best path possible to reach their professional goals,” said California Winter League General Manager, Justin Reschke about the agreement. He continued, “With 16 teams across the Midwest, East Coast, and up into Canada, the Frontier League is able to provide quality destinations, support, and top tier competition for players to continue to develop as professionals so they’re an obvious choice when it comes to working directly with a professional league.”

In addition to 30-35 CWL players, on average, signing with Frontier League teams every year, the CWL also hires managers from the other three MLB partner leagues including the Atlantic League, American Association, and the Pioneer League. These managers manage CWL teams and work with players every day. They also come with contracts in hand, ready to sign players for their organizations. In addition to managers and coaches from the partner leagues, the CWL makes sure to have representation from the United Shores Professional Baseball League and as many MLB pro scouts as possible rounding out its coaching staff every year.

Since its inception in 2010, the California Winter League has seen over 800 CWL players sign professional contracts at all levels of baseball, including the Major Leagues. In 2021, 2018 CWL Alum Tyler Matzek played a crucial role for the Atlanta Braves, coming out of the bullpen in tough situations all season and throughout the playoffs as they captured their fourth World Series championship. Entering its 14th year, the 2023 CWL season will begin with players reporting on January 23rd. Teams will play five to six games per week during the month-long season which culminates in a championship game and sees players depart on February 20th.